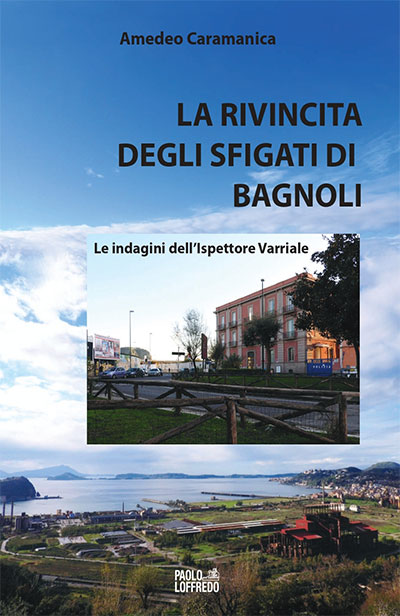 “LA RIVINCITA DEGLI SFIGATI DI BAGNOLI” is, as one can imagine, the sequel of my detective novel “I dinamici sfigati di Bagnoli”, a tribute to the policemen in the investigation team in a peripheral district of Naples, Bagnoli, under the command of the superior Inspector Gennaro Varriale. There will obviously be new elements taking place in their stories and in the narrated events. It has the same features of the first novel: various intersecting and difficult to solve cases which are narrated through the “serial” technique (the first case is only solved eventually) and in a form which could be defined dialogued and expressive due to the slang jokes which are able to create emotions and suspense such as hilarity, humorism and irony.
Anyway, there are two important news characterising this novel: the events are also a way of highlighting the features and habits of the district itself, “not in disposal” but “decommissioned” and “impatiently waiting for something which is not coming and who knows if it will”. In the end, it shows fear, anxiety and concern about the lockdown from Covid-19.

Amedeo Caramanica was born in Mondragone (CE) on the 6 december 1936. He has been living in Naples for 54 years, holds a degree in Literature and was an italian, latin and history teacher in high school and a literature teacher in middle school. Moreover, he wrote many scholastic volumes: “Giovani protagonisti”; “Giovani sempre”; “Prospettive future”; “Protagonisti alla ribalta”; “I passi dell’uomo”; Il nuovo I passi dell’uomo”; ”L’umana avventura” e “I percorsi della storia”, all published by Casa Editrice Loffredo. ”Fantastica avventura”, published by Medusa; “Terra dei fuochi e salvaguardia del creato”, published by Fratelli Ferraro and ”Ma io scherzavo …!” about bullying and cyberbullying with Edizioni Protagora.
He moreover focussed on theatre as a director and author of about 30 comedies, and is at the moment the author of four novels: “Operazione cigno bianco” (ebook); “La grotta dei misteri” (Loffredo, ebook) ans “Gli angeli guerrieri della Terra dei fuochi” (Edizioni Rogiosi), and “I dinamici sfigati di Bagnoli” (Edizioni Paolo Loffredo).