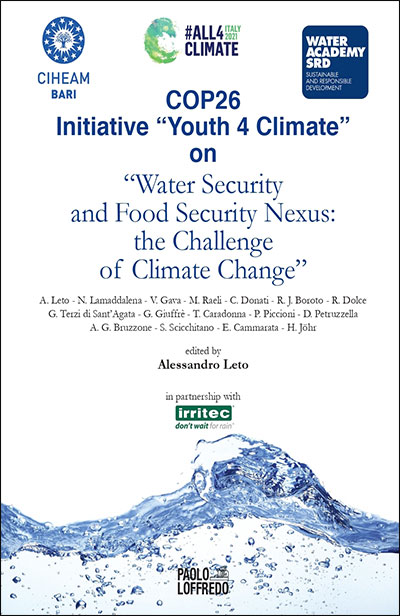 The present publication presents the Proceedings of the High Level Round Table Symposium “Water Security and Food Security nexus: the Challenge of Climate Change” promoted by Water Academy SRD in collaboration with CIHEAM Bari Institute in the occasion of the 2021 COP26 Initiative “Youth 4 Climate”. The aim of the Event and especially of the present Publication, is to focus on the importance to root and diffuse a New Culture of Water at the international level in the Didactic Curricula. To strengthen the engagement of young generations to better comprehend and consequently face the severe changes impose by Climate Changes in Water Access and Water for Life policies when dealing with the strategic issue of the nexus Water Security/Food Security. The presence of relevant personalities from Multilateral Institutions, Research Centers, Universities and Private Sector allowed a fruitful and positive debate and confrontation on the urgent need to find appropriate solutions to tackle this epochal challenge. Considering that Agriculture is the human activity that consumes the highest percentage of fresh water, it represents the core of the defiance. This book represents a new important step ahead in Water Academy SRD tradition to publish the Proceedings of its HLRT Symposium in the Editorial Series “Dialogues around Water”, for the benefit of those Scholars and Students who aim to investigate the most updated achievements on this subject.

Alessandro Leto (Genoa, 1965), Geographer, Journalist and Documentary Film Director, is considered one of the most brilliant and successful analyst in the field of study of Sustainability at the international level. He is a University Professor, conceived in 2005 the concept of “Sustainable and Responsible Development” and is currently investigating the advantages to adopt Resilience principles in order to efficaciously tackle the great challenges humanity will face in the near future when dealing with nature’s major changes. He developed a specific competence in Geopolitics of Natural Resources with a focus on Water Studies and launched the informal movement for a “New Culture of Water”, later adopted as Manifesto by the Geneva Water Initiative in 2016. Author of several scientific publications, he is Founder and Director of Water Academy SRD Foundation and currently Director of the Master on “Water Awareness, Consciousness, Knowledge and Management” released by International Telematic University UniNettuno. Member of the European Academy of Science since 2016, he chaired the first ever “Special Event on Water” organized by the G20 in 2021.