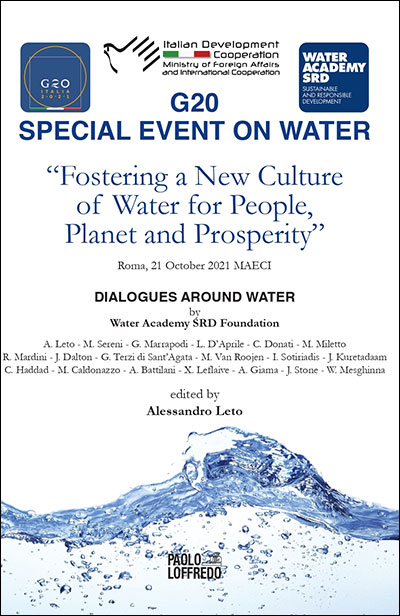 G20 Special event on water
Fostering a New Culture of Water for People, Planet and Prosperity

The present publication presents the Proceedings of the High Level Round Table Symposium “Fostering a New Culture of Water for People, Planet and Prosperity” held in Rome on October 2021 under the Italian Presidency of the G20 and promoted by Water Academy SRD Foundation. The aim of this Event and especially of the present Publication, amid others indeed, is to focus on the importance to root and diffuse a New Culture of Water at the international level in the Didactic Curricula. The G20 promoted for the first time a Special Event fully dedicated to Water Resources and the Directorate General of Cooperation for Development of the Italian Ministry of Foreign Affairs gathered together personalities from Multilateral Institutions, Governments, Private Sector, NGO’s, Research Centers and Universities to discuss on how to support and enhance a Water for All Strategy. As Water is essential to life, both lack and scarcity of it undermine human security on our planet. Furthermore as the Earth Carrying Capacity reached its limits, Water even more then several other natural resources is under a permanent threat. A growing and transversal number of persons feel Water related emergencies on our planet as global priorities to be faced and overcome without further delays to secure social inclusion, social justice, women empowerment, sustainable economic growth, respect of biodiversity and a more balance and harmonic development on earth as well as in and on the seas. But this same priorities recall the importance of a new approach, mainly based on a shared cross and interdisciplinary Policy Coherence of Water. This is the reason behind the decision of the G20 Italian Presidency to promote a Capacity Building vision based on a stable educational new approach, nowadays necessary to make the difference to strengthen all necessary actions on Water related issues to achieve the SDG 6. This book represents a new important step ahead in Water Academy SRD Foundation’s tradition to publish the Proceedings of its HLRT Symposium in the Editorial Series “Dialogues around Water”, for the benefit of those Scholars and Students who aim to investigate the most updated achievements on this subject.

Alessandro Leto (Genoa, 1965), Geographer, Journalist and Documentary Film Director, is considered one of the most brilliant and successful analyst in the field of study of Sustainability at the international level. He is a University Professor, conceived in 2005 the concept of "Sustainable and Responsible Development" and is currently investigating the advantages to adopt Resilience principles in order to efficaciously tackle the great challenges humanity will face in the near future
when dealing with nature's major changes. He developed a specific competence in Geopolitics of Natural Resources with a focus on Water Studies and launched the interdisciplinary informal movement for a "New Culture of Water", later adopted as Manifesto by the Geneva Water Initiative in 2016. Author of several scientific publications, he is Founder and Director of Water Academy SRD Foundation and currently Director of the Master on "Water Awareness, Consciousness, Knowledge and Management" released by International Telematic University UniNettuno. Member of the European Academy of Science since 2016, he also chaired in 2021 the COP26 Event “Youth 4 climate” on “Water Security and Food Security Nexus: the Challenge of Climate Change”, jointly organized by Water Academy SRD Foundation and CIHEAM Italy.