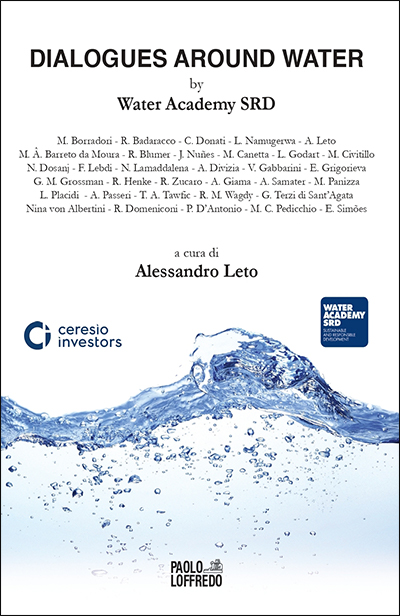 In this work are collected as Proceedings the Acts of the High Level Round Symposium which took place in Lugano in 2019 undet the name " Water management and water protection, Soil consumption, Natural Capital defence and Urban growth".
Many authoritative and international personalities from the scientific world, Universities and Multilateral Istitutions took part in it. They confronted on an actual theme, fundamental to redefine the development directions of our national communities, living in a world increasingly urbanized. Considering the relationship between people and water recources, which is becoming more and more unbalanced, due to the anthropization causing damages to the environment, aggravated by climate change.
Leah Namugerwa, young Ugandan activist, took part in the works, representing her african peers of the Fridays fot Future movement.

Alessandro Leto (Genova, 1965), Geographer, Journalist and Documentary Film Director, is considered as one of the most brilliant and successful analyst in the field of study of Sustainability at the international level. He is a University Professor and conceived in 2005 the concept of “Sustainable and Responsible Development” and is currently investigating the advantages to adopt Resilience principles in order to efficaciously tackle the great challenges humanity will face in the near future when dealing with nature’s major changes. He develop a specific competence in Geopolitics of Natural Resources with a focus on Water Studies and launch the informal movement for a “New Culture of Water”. Author of several publications and of Scientific Articles, he is co-founder and Director of Water Academy SRD (2016) and currently Director of the Master on “Water’s Awareness, Consciousness, Knowledge and Management” released by International Telematic University UniNettuno. He has had appointments in the Italian institutions and at UNIDO.