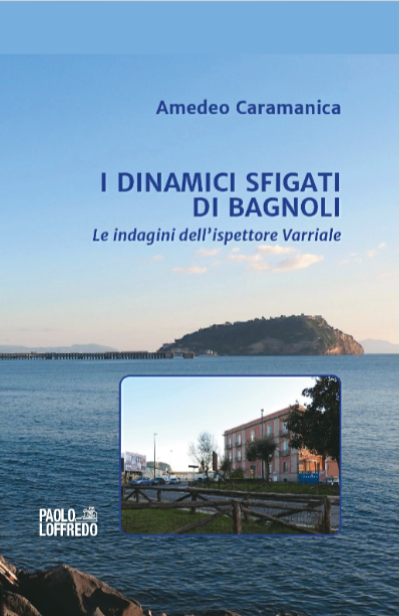 "I dinamici sfigati di Bagnoli" is a detective story about a police detective team of a suburban police station commanded by a superior inspector, deputy commissioner, "the inspector Varriale". It is called upon to solve investigative cases, apparently "of normal administration", but which are often difficult and complicated. Cases that only the self-denial and the painstaking application of the team of "losers", so nicknamed by colleagues in the city center, and the nose and stubbornness especially of the superior inspector, challenged by his direct superiors and vilified by a presenter of a local television, they finally manage to solve. Four intricate cases: a debt suicide, a revenge poisoning, a passionate crime, the indictment of a priest for pedophilia. There are acts of violence, kidnappings, attempts at stalking, revenge, and problems of life experienced by the protagonists, which involve and excite the reader.

Amedeo Caramanica, born in Mondragone (CE) on 6/12/1936, residing in Naples for 53 years, graduated in literature, was a professor of Italian, Latin and history in high school and teacher of literary subjects in the Middle School; he is also the author of scholastic texts: “Giovani protagoni­sti”; “Giovani sempre”; “Prospettive future”; “Protagonisti alla ribalta”; and of four courses of history for the 10 degree Secondary School: “I pas­si dell’uomo”; “Il nuovo I passi dell’uomo”; “L’umana avventura” e “I percorsi della storia”, all with the Loffredo Publishing House; “Fantastica avventura” with the Medusa Editions; “Terra dei fuochi e salvaguardia del creato” with the Ferraro brothers; and it is of imminent exit: “Ma io scherzavo sul ‘bullismo’ e ‘cyber bullismo’”, with the Edizioni Protagora. He has also been involved in theater, as a director and as the author of about thirty comedies, and is currently the author of three novels: “Operazione cigno bianco”, online edition; “La grotta dei misteri” (Ediz. Loffredo) e “Gli angeli guerrieri della Terra dei fuochi” (Edizioni Rogiosi).